You are here:
Attractions in and around PorlezzaBlogItalian Food 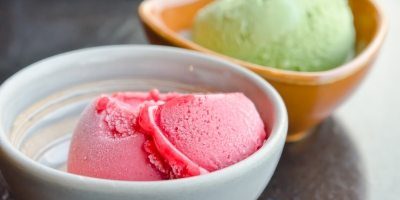 One simply cannot think about Italy without thinking of Gelato – ice cream. Italy has long been associated with culinary delights such as pasta, pizza, truffles, wine and more, but it is a well known fact that the best ice cream in the world comes from Italy. Just like chocolate has to be Swiss or Belgian, brioche has to be french and worst has to be German… ice cream, or Gelato has to be Italian to be authentic and well….good!

We call Gelato the “Italian Ambrosia” for a reason. Just like Ambrosia, the food of the Gods which grants immortality, so does one gelato a day make you feel – as if you’re immortal and invincible. That is, of course, if you have your gelato in Italy.

It’s more than just technique. It’s also about the ingredients. The water used in the sorbet, the cream or milk used in the ice cream, the fresh fruit… anyone who ever tasted ice cream in Italy and then anywhere else in the world knows very well that the texture and tastes are completely different. Real Italian ice cream cannot be replicated with any other ingredients, no matter how perfect the ice cream maker’s technique is.

Each region in Italy (as is the case with many other countries) is known for its own special cuisine. However, Gelato seems to be the common denominator in Italy. Anywhere you go you can find great ice cream and the Lombardy region is no different.

That said there are several places we’ve sampled and can recommend for tourists who arrive at Porlezza and the surrounding area.

We highly recommend Bar Italia and Visconti. When it comes to Visconti they have 2 places very close to one another. One – the main cafe is right by Bar Italian on the waterfront. The other which is where we always go for our Gelato breaks is a bit further along the promenade just by the round about. It’s hidden in a corner by the alley but you cannot miss it as they have a giant ice cream cone trash bin outside 🙂

We’ve had some great ice cream there – best one was the dark chocolate and the blueberry.

They also have a great, homemade, ice cream sandwich!

Menaggio too has several ice cream places but we’ve had what we still believe is the best gelato in the world there. The first time was in 2011 when we stumbled upon the place we like to call “the hole in the wall”. We were walking on the main street in the center – via Calvi – from the lake up towards the church when we saw people who seemed to appear out of nowhere holding cups of very rich, black gelato. We slowed our pace down and tried to figure out where they were coming from and what kind of ice cream they were eating. They literally seemed to pop out of the wall to our left. So we came a little close and sure enough there was a window and a door and the tiniest of places with no sign or anything… but there was ice cream in the window – several tastes and colors and one of them was simply named “cioccolato” and was so dark it looked black. If you’re even half the chocoholic I am… be warned. That was absolutely the very best, darkest, richest chocolate ice cream I have ever had in my entire life!

Now you must be wondering two things:

1. Why is there no picture of this glorious ice cream

2. How on earth are you going to find that “hole in the wall” in Menaggio which has no name.

The answer to the first questions is that the ice cream was so good it was gone before we could even stop to think about taking pictures. The answer to the second question is…. just look for the next place we recommend as it is right across the street!

The second place is Menaggio has a name and an address. It’s called: Panna e Cioccolato (  Cream & chocolate – Thank you Maria for the correction!) and it is on via Calvi 5. Lonely Planet’s “Hiking in Italy” described it as “perhaps the best in Italy”, and you know what? They were right!

When we arrived there in 2012 it was by chance. We wanted to go back to our favorite “hole in the wall” place but it was closed. and Then we saw across the street another little place which had interesting colors of ice cream. The owner, inquiring where we are from and upon learning we came from Israel eagerly took us to outside to show us a photocopy of the relevant page in Lonely Planet’s guide in Hebrew. He then explained that he makes fresh ice cream every day and the flavors change according to what he finds at the market. So your favorite flavor of today might just not be there tomorrow, which means… you have to come back every day 🙂

Apparently, we’re not the only ones who think this way of Panna e Cioccolato!

So to sum Menaggio up, via Calvi 5 is your destination – either at Panna e Cioccolato and/or right across from them the place with no name (but they too have a giant ice cream cone trash bin as a marker!). 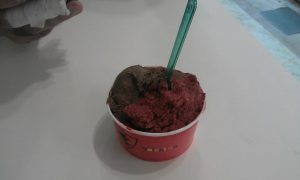 Sirmione is a truly magical place that deserves a post of its own. But we’re listing ice cream places here and another one of the best ice creams we’ve had in Italy was there. This little touristic hub is littered with gelato places and we just chose one at random, which looked nice and had free WiFi (a rare thing in Italy!). It is called “ Bar Gelateria Valentino” and it is in Piazza Porto Valentino. I ordered my regular combination of dark chocolate and forest berries ice cream and it was just delicious!

Sirmione is about 1.5 hours drive from Porlezza but if you’re in the area don’t miss it!

That’s it with our Gelato experiences. We did have gelato in more place such as Portofino, Milan, Bellagio but we listed the best ones here in this post for you. Enjoy and have an icy sweet day!